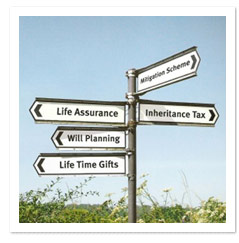 I hope this case study will begin to paint a picture for the reader of what financial planning really is all about. I am using an actual Client to show how the threads of Inheritance Tax mitigation planning, outlined elsewhere on this site, can be drawn together to create a bespoke, comprehensive plan. To fully understand the planning put in place within this case study, the reader should also familiarise themselves with the other articles in this section of my website, but, in particular, – Business Property Relief (BPR), Alternative Investment Market (AIM) and Habitual Expenditure out of Normal Income.

I’ll call this lady Enid, and describe her financial situation following the recent death of her husband, Claude.

Enid is aged 70 and is in good health; other than a couple of successful cataract operations recently and childbirth several decades ago, she has hardly troubled the medical profession. Following Claude’s death, her net pension income, from the Civil Service and the State, is in the order of £2,000 per calendar month and, of course, index-linked. Despite the wealth that Enid and Claude acquired during their lives together, both from savings and inheritances received, they had a fairly modest lifestyle, which is unlikely to change significantly. Consequently, Enid will manage quite comfortably on her pension income, so the £15,000 per annum of net income generated by her investments will be largely surplus to requirements.

Following the administration of Claude’s estate, Enid’s assets (she has no liabilities), ignoring furniture and effects, etc, amount to:

Whilst Enid’s overriding concern is to maintain her own financial independence, come what may, she continues to be concerned about the impact Inheritance Tax (IHT) will have on her two sons when they eventually inherit. This had been a subject of discussion over a number of years, hence the existing IHT plan above. Also, Claude had an IHT-efficient element to his portfolio, comprising Alternative Investment Market (AIM) shares qualifying for Business Property Relief (BPR). This portfolio was bequeathed to his sons under the terms of his Will. However, having owned the shares for considerably more than 2-years, the bequest, which gave both sons an inheritance of over £70,000 each, didn’t use any of Claude’s Nil Rate Band (NRB).

Claude and Enid were keen to help their sons during their lifetimes, rather than to leave everything by way of an inheritance on the second death. Consequently, prior to his death, Claude had drawn his pension benefits and, at that time – July 2011 – Enid had given both sons £100,000, mainly funded from her earlier inheritance from her father. These were Potentially Exempt Transfers (PETs), meaning there were no immediate IHT issues, but the gifts would be added back to the taxable estate if Enid was to die within 7-years.

Based on the figures outlined above, and current legislation, the potential IHT liability on Enid’s subsequent death (assuming it was after July 2018) will be in the order of £394,800, as follows:

The existing IHT Plan held by Enid is valued at nil for IHT purposes, as it qualifies for Business Property Relief, having been held for more than 2-years and being invested in qualifying business assets. Currently (2015/16), the NRB is £325,000, but as Claude used none of this upon his death, two NRBs will be available to Enid upon her subsequent death.

Using the sophisticated cash-flow modelling software available to me, I established that £100,000 from savings and investments and £8,000 per annum of net income was available for IHT planning without impacting Enid’s current or future lifestyle.

The following parameters were used in the cash-flow modelling:

Two scenarios were then run, excluding all of the cash savings, and, firstly, assuming that investments didn’t grow at all and, secondly, that investments grew at 5% per annum on average net of taxes and charges.

In summary, the recommendations were as follows:

Starting with a potential IHT liability of £394,800, the impact of this planning would be:

Strictly speaking, in Enid’s circumstances, the tax-savings were marginally less than stated here, because there was some £2,000 in Capital Gains Tax to pay following the portfolio reorganisation.

The PET is actually only £97,000, because Enid hasn’t used her Annual Gift Allowance of £3,000 this year. The funds came from investments sold within Claude’s estate and transferred to Enid by the Executors.

Readers with some knowledge of IHT planning may ask why a Deed of Variation (DoV) wasn’t used. A DoV is a means of effectively re-writing someone’s Will post mortem, which, if it is completed within 2-years of death, is effective for IHT purposes. In this scenario, the DoV would have given £100,000 to the sons directly from Claude’s Will, using some of his NRB. In turn this would then reduce the amount of the double NRB available on Enid’s subsequent death to some 169% of the then NRB rather than 200%. The NRB was set at £325,000 in April 2009, remains unchanged in 2017/18 and is scheduled to remain the same until 2020. With that background, and Enid’s realistic life-expectancy of 20-years, 200% of the then NRB looks much more attractive than just 169%.

The level of cover for the Whole of Life policy was established solely by reference to affordability; a premium of £8,000 per annum (actually £8,000.99) provided £230,000 of cover, assuming acceptance on the provider’s standard, non-smoker terms.

The amount allocated to the AIM Portfolio was arrived at via a thorough understanding of Enid’s attitude to investment risk and tolerance for loss, coupled with an analysis of the likely risk profile of a new portfolio comprising some AIM shares and a balance in lower risk, defensive investments.

I have been giving investment advice to Enid (and Claude) since August 2005 and her attitude to investment risk has always been what I would now describe as “moderate” and would define as:

“A moderate risk investor is looking for a balance of risk and reward, seeking higher returns than those available from a high street deposit account and willing to accept a moderate amount of fluctuation in the value of their investments as a result. However, they would feel uncomfortable if their investments were to fall by more than 15% in one year”.

The first stage in setting-up a new portfolio was to research the marketplace and decide upon a Discretionary Fund Manager (DFM) with whom we could partner and who could provide both the AIM and low risk elements required for the new portfolio. Subsequently, I debated with the DFM how we could achieve Enid’s objective without materially altering this overall risk profile of the portfolio.

From this discussion we settled on a 45/55% split between AIM and the lower risk elements. I found the DFM to be overly optimistic in so far as, using this split, they considered the downside risk would be as low as -11.3%, which is well within our target range for a “moderate” Investor of up to -15%.  However, the DFM was not managing an exclusively AIM (UK smaller companies) portfolio at the beginning of the recent recession.  Consequently, I believed it was better to look at some longer-term statistics and consider what the worst case scenario could be, so that Enid entered into this phase of her financial planning with her eyes wide open.

I took a leading (as ranked by Financial Express) UK Smaller Companies Fund – the River & Mercantile UK Equity Smaller Companies Fund (blue line in the chart below) – and one of the leading (again ranked by FE) Cautious Managed Funds – Jupiter Distribution (red line in the chart below) – and compared them separately and when combined on a 45/55% basis.

My observations on this analysis were as follows:

My view is that Lehman et all is a worst case scenario and whilst I can’t envisage another crisis of similar proportions in the foreseeable future, none of us knows what is around the corner.  Consequently, despite the DFM’s optimism, I told Enid that she needed to be prepared for -30% downside risk.

I had first introduced AIM investment to Claude in May 2005 when, as Attorney for his Mother, he was keen to try and save some IHT on her eventual death. Consequently, upon my recommendation, we converted her portfolio of largely FTSE100 Index shares into an AIM portfolio; an investment of some £65,000 in total. Unfortunately, Claude’s mother died on 01 July 2007 just weeks before achieving the 2-year qualification for BPR!

Claude decided to retain the AIM portfolio and it was this portfolio that provided his sons with some £70,000 each around 7-years later.

With this indirect experience of AIM investment, being a long-term investor and having a strong desire to achieve the IHT savings available, Enid was happy to proceed on the 45/55% basis. She understood that whilst the DFM was going to strive to keep the downside risk as low as possible, this could well exceed her normal tolerance level in extreme market conditions.

The income from the AIM portfolio was estimated by the DFM to be some £5,000 per annum and it was agreed that this would be accumulated to meet some of the management, administration and advice expenses, reducing the impact on the tax-efficient capital.   Incidentally, Enid’s existing New ISAs and her future New ISA Allowances were also going to be utilised within the AIM portfolio, particularly with an eye towards future tax-free capital gains.

The income from the low risk portfolio was estimated by the DFM to be some £10,000 per annum and this was going to be paid out to Enid to both supplement her pensions and provide the £8,000 needed for the life assurance premiums.

Readers with some knowledge of IHT planning will be wondering what impact the Residential Nil Rate Band (RNRB) is going to have on this planning, but my view is very little.  Enid’s estate, with continuing house price inflation in South East London and the growth in her investments, is now in excess of £2m (whilst the AIM Portfolio is now IHT-free, it’s value is included in the RNRB calculation) .  At this point, the RNRB starts to reduce at the rate of £1 of the band for every £2 over £2m.

In any event, Enid’s standard of living or access to the vast majority of her savings and investments hasn’t been impaired and her Sons will receive their full inheritance in due course.  So, even if these elements of the original plan are no longer strictly necessary for IHT mitigation, the “baby hasn’t been thrown out with the bath water”.

If you believe you have an Inheritance Tax problem and want to know what legitimate steps you can take to mitigate this, contact me today, or complete the form below.