What is an Investment Trust and should I invest in one? 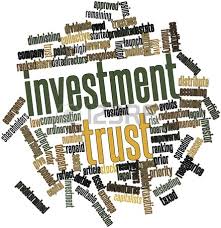 Recently, one of my Clients wrote to me to say that she is shortly to receive her share of an inheritance from a family trust and that the Solicitors, who are the Trustees, were asking whether she and her Sisters wanted the investments transferring or sold. This article is based on my response and provides an insight into what an Investment Trust is and whether it is a suitable investment. It also gives an insight into the Capital Gains Tax issues of selling long-term investments.

My Client, let’s call her Mavis, is retired and has a “moderate” approach to investment risk, which I define as: “looking for a balance of risk and reward, seeking higher returns than those available from a high street deposit account and willing to accept a moderate amount of fluctuation in the value of their investments as a result. However, they would feel uncomfortable if their investments were to fall by more than 15% in one year”.

As investment market conditions vary daily it is difficult to say with any certainty what a suitable portfolio for a moderate Investor would look like, but if it was substantially different to a 50/50 split between “growth” and “defensive” investments, further investigation would be called for. What “growth” and “defensive” investments are is a subject for another day, but, for the purposes of this article, I’ll use a narrow definition of shares quoted on a Stockmarket for growth investments and cash or fixed interest securities for defensive.

The Solicitors wrote to say that the portfolio was valued at some £295,000, that some Index-linked Treasury Stocks, to the value of £142,031, had already been sold on the recommendation of the Trust Stockbrokers and that the portfolio now comprised this cash plus:

An Investment Trust is a limited company whose business is the investment of shareholders’ funds, the shares being traded like those of any other public company. They were the forerunners of Unit Trusts and other collective investment arrangements, and provide a cost-effective means for the smaller Investor to obtain a diversified, professionally managed portfolio of investments.

Using research provided by Financial Express, I prepared a report on the three Investment Trusts and this showed that, across the three Trusts, 93.5% was invested for growth – shares from all over the globe – and only 6.5% in “other” investments, not necessarily defensive investments. Some 32% of the combined portfolio was invested in shares quoted on US Stockmarkets, so very US-centric.

I suppose the family trust could still be said to be invested in line with a moderate mandate, with the cash held from the disposal of the Treasury Stocks offsetting the higher risk of the Investment Trusts with an overall 52/48% growth/defensive split.

However, on a standalone basis, which is where the beneficiaries would be if they accepted a transfer of these investments, the Investment Trusts are high risk in anyone’s parlance. The chart below shows the fairly dramatic swings in share price over the 10-years from July 2004 – July 2014 (Source: Financial Express). 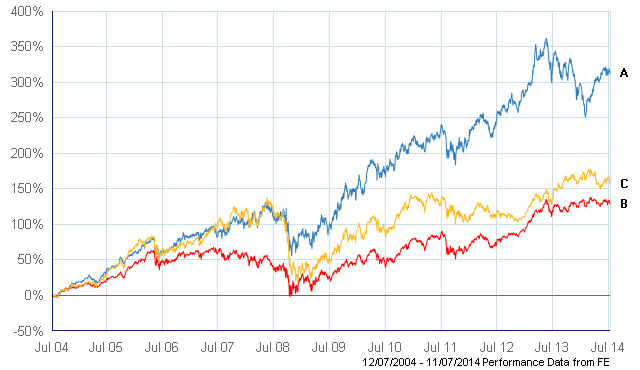 In addition to the inherent investment risk of a portfolio of international shares, Investment Trusts carry a further degree of risk compared to other collective arrangements, as follows:

According to the July 2014 edition of Money Observer, the three Investment Trusts had the following Discount/Premium to NAV and Gearing (ratio of borrowing to net NAV – 100% = no borrowing):

So, what this tells us is that of the three, only Murray International is viewed positively by the market in terms of the prospects of the Managers doing a good job in the future. However, new Investors are paying £107.40 for every £100 of assets in Murray International as a result. Also, all three are increasing risk by borrowing money to invest – Monks the least and Murray International the most. The Alliance and Monks Trusts are in the Global Sector, whilst the Murray Trust is in the Global Equity Income Sector and, if we take both sectors together, to put the above figures into some sort of context:

Because of the additional risk factors – discount/premium to NAV and gearing – I generally don’t recommend Investment Trusts to Clients and, consequently, don’t monitor or research them. Accordingly, I am unable to say whether these Trusts are good, bad or indifferent, other than what can be surmised from the above analysis.

All three of the Investment Trusts in this random example predominantly hold growth investments and whilst the majority of the hundreds of different Investment Trusts are geared towards longer-term capital growth, there are a number with a more balanced approach, between grown and defensive investments, than these.

There were two questions Mavis asked me in relation to the family trust, as follows:

Perversely, the letter from the Solicitors implied that there was a tax advantage to having the shares transferred, but that is not the case; a transfer would be a deemed disposal for CGT purposes, so just as though the Trustees sold the shares.

The first question was easy to answer and this was in the negative. Because of the attitude to risk Mavis wants to adopt with her investments, these Investment Trusts are way outside her risk profile.

The second question is a little more problematic and needed some CGT calculations (see below), but boils down to risk and tolerance for loss. In the final analysis, if the Investment Trusts are unsuitable for retention long-term, they are a gamble short-term.

Each Tax Year the sale is delayed would save just £1,582 (£5,650 @ 28%) (actually it would be slightly more as the Allowance rises annually). So, based upon the assumed net proceeds, each additional Allowance used only makes some 1.15% difference. In other words, if sufficient shares were sold now to use this year’s CGT Allowance and then the remaining shares fell by a little over 1% only before the next sale, the benefit of waiting would be wiped out.

Based on the statistics used by Financial Express to prepare the above chart, in the 12-months July 2012 – July 2013, the portfolio rose by some 19.6%. However, in the preceding 12-months it had fallen by 2.63%. Of course, neither scenario is likely to be repeated, but it shows how much of a gamble retaining the shares short-term can be.

Based on the risk profile adopted by Mavis, the “bird in your hand (sell now and pay all the tax) is worth more than the two in the bush (wait and see if the shares go up further)”.

The market value of investments and the income from them can go down as well as up. Shares may be subject to sudden and large falls in value and you may get back less than the amount invested.

Past performance is not a guide to the future.

If you have investments you want reviewing then ask me today or complete the form below, including your date of birth, and I’ll give you a link to our risk profiling tool to start the review process.