In this guest blog, James Thornton looks at some of the issues for older divorcees.

In this blog post, we look at the increasing number of couples separating and divorcing later in life – increasingly referred to as the ‘Silver Splitters’. We prefer to call them ‘Diamond Divorcees’.

What is it that triggers thoughts of divorce for those in their 60’s or beyond and what are the things they should be looking out for?

“Statistics can be made to prove anything, even the truth”

The first thing to note by way of introduction is that whilst overall divorce rates continue to fall in the UK as a whole, the number of those divorcing who are over 60 remains increasingly significant.

Nicola Haines at the ONS has put it very succinctly:

“Divorce rates for opposite-sex couples in England and Wales are at their lowest level since 1973, which is around forty per cent lower than their peak in 1993. However, among older people rates are actually higher in 2017 than in 1993 – perhaps due to the fact we have an increasingly ageing population and people are getting married later in life.”

“The number of divorces among same-sex couples more than trebled between 2016 and 2017 – although this is not surprising since marriages of same-sex couples have only been possible in England and Wales since March 2014.” 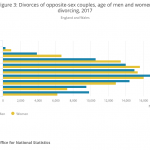 The full statistics across all age ranges can be found here.

So why is it happening?

Rules introduced by the then Chancellor George Osborne (remember him?) in April 2015 year may have contributed to more couples who have reached retirement age to consider splitting up. When introduced, those rules gave the over 55s the freedom to cash in their pensions and take out lump sums to spend on whatever they choose (subject to tax). it is a trend that has apparently continued since then.

Whereas those who may have stayed together because of financial security it seems that the new rules are giving them the confidence to go it alone with their new found freedom. No longer is it necessarily the case that the matrimonial home will have to be sold – especially where there are pension pots available for distribution that hitherto were locked away.

Divorce is now less of a taboo area than it was, certainly in the 1960’s and 70’s, when the baby boomer generation were getting hitched. People now live longer, and are healthier and fitter well into their retirement. Perhaps ‘til death do us part’ is a bit longer now than was originally expected to the extent that couples feel that they want more from life in their later years.

What are the key features of a silver divorce?

In many ways divorcing later in life is a simpler proposition. There will be no minor children to make arrangements for whether financial or arrangements for with whom they will live. But adult children can bring new issues into the equation – seeing the split as a threat to their inheritance prospects. Adult children may become actively involved in their parents’ divorce, taking sides or looking to influence the outcome of the financial settlement for not wholly altruistic reasons. In simple terms, the court will not take adult children into account at all.

The relevant factors on divorce

For any divorce, whether young couple or older the court applies the same criteria when determining financial claims. These are to be found in the Matrimonial Causes Act 1973 at S.25 and are summarised as follows:

None of the factors takes precedence over any other, but clearly some will have more relevance to older divorcing couples than others – such as the impact on pension benefits.

The starting point on division of assets is likely to be more or less an equal split of the marital assets. These will more often than not be the vast majority of what the couple has, particularly in a marriage lasting well over 20 years.

Where one party hasn’t worked for many years though, the likelihood of a lifetime maintenance order is a very real one. Whilst the overall trend in recent years is moving towards ending the notion of a meal ticket for life, ongoing support on a joint lives basis is likely unless it looks as though the recipient can achieve financial independence – something that may be more difficult in later years. Again, the availability of pension cash may come into play here, although the court cannot compel a party to take their pension provision in cash, to say nothing of the tax penalties of withdrawing such lump sums.

Whilst the increasing numbers of divorcees over 65 may seem a depressing thought, what it means is that couples must now feel hopeful that their future is not stuck in the past. They can bring more enjoyment to their later years. No more are they duty bound by the stigma of divorce, or feel trapped in a loveless marriage with no chance of financial independence – they are grabbing the opportunity for a new start to the rest of their (longer) lives.

Don’t just take our word for it. In a recent report commissioned by the BBC, market researchers Mintel found that 35% of British people over 51 are single. It goes on to highlight that according to ONS figures, there has been a sharp increase in the number of over 65’s getting hitched and the number of second time brides and grooms rising by 21% and 35% respectively. The report is here.

For more details or if you would like representation in financial or divorce proceedings, please do not hesitate to contact James. Paradigm Family Law offers a free initial consultation and their fixed fee solutions cover financial proceedings from start to finish.

Having a clear financial plan for the future is essential, so contact me, using the form below, at the earliest possible stage so that I can help put that in place. At the same time, I can assist with the completion of Form E (Financial Statement for divorce proceedings). I can also assist with the drawing-up of the necessary new Wills, Trusts and Lasting Powers of Attorney.